It’s not often my family and I play tourist in my home town of Los Angeles. Heavy traffic not withstanding, there are the inevitable commitments calling out our names. This summer I’m surprised to find it’s already early July steaming into a summer that seemed so full of potential dilly- dallying. That kind of ride-your-bike-to-7/ll- for-a-slurpee-in-sweltering-heat from childhood memory that pulls me into all sorts of hopes and dreams about no scheduling for my kids. Yet, alas, my middle son has a required summer course across town, his older sister has a part time job, the youngest is brushing up on writing in a teacher-suggested class, and even the dogs had a procedure. My husband in on overdrive at work and I have a book that’s supposed to be already written. Braces were bought last month and applied.  Yet, I suppose this has all forced us into accidental tourism on our own turf and in our own lives. I’ve learned some important lessons along the way in just a short 4 weeks of summer (gasp). 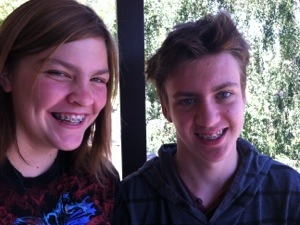 The older kids look cute in braces. Braces are expensive. Yes, they are, especially when you go to the best orthodontist in the Tri-Counties area. Oh, I guess we don’t live in a tri-counties area. But we did pay for a tri-counties area size x-ray series. I’m told the orthodontist is pricey because he’s good. Well, it seems whoever said that was right.  He was good enough to catch a problem in the the 360 degree x-rays. He saw what turned out to be a serious infection that our teenage son had in his jawbone, one that might have continued to go unnoticed, had we not paid for the braces and the expert braces put-er-on-er. Our son had oral surgery and is on the mend. So, suffice it to say, on the way to summer braces and our L.A. orthodontist, we stumbled into a problem and a solution. 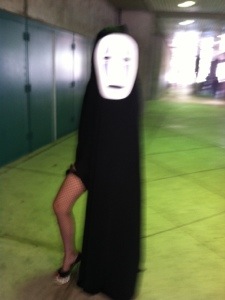 “No Face” is a girl. If you haven’t seen the amazing movie, Spirited Away, it is a film from Japanese writer/director Hayao Miyazaki.  It’s a beautifully animated movie about spirits and courage and feminine kindness.  No-Face is a character in the film. No-Face is a spirit that won’t stop consuming. The spirit gorges itself on food and money constantly to assuage it’s loneliness. No -Face is a girl. I have pictures from the Anime Expo in downtown L.A. to prove it. Not because I actually went, but because I was dropping off my teenage daughter, and No-Face walked by…and SHE was wearing fish nets. Now, how accidental is that? 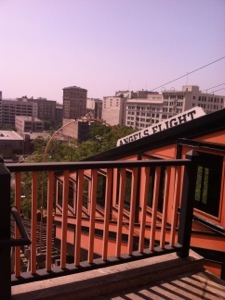 You can take a train car to heaven. Well, something pretty close to that anyway. After dropping the teenage daughter off and having a horribly bored 9-year-old inthe back seat, I Googled “fun for kids in downtown L.A.”. One thing lead to another and we ended up at the Angels Flight train car. Shortest steepest train ride I’ve ever taken. Worth every penny. Actually, worth the $1 it cost (in total) for both of us to take the ride. Of course, I later Googled more on the rail car that travels 300 feet up a steep hill and found out that someone actually did take an Angel’s Flight to heaven. There was an accident in 2001 where the rail car went careening down the tracks and an elderly man died. But not to worry, it’s all fixed now.

There has also been a slew of summer movies, romantic dates for my husband and me, and a few lovely motorcycle rides.  There is  also a free-form vacation scheduled in New York City in early August, so do not mourn for my summer soul. Last week I was losing my mind with our busy schedules. But this week I see there is probably a higher order to things. Just like the cracks in Los Angeles sidewalks where flowers grow, accidental tourism springs up in our busy Los Angeles lives.