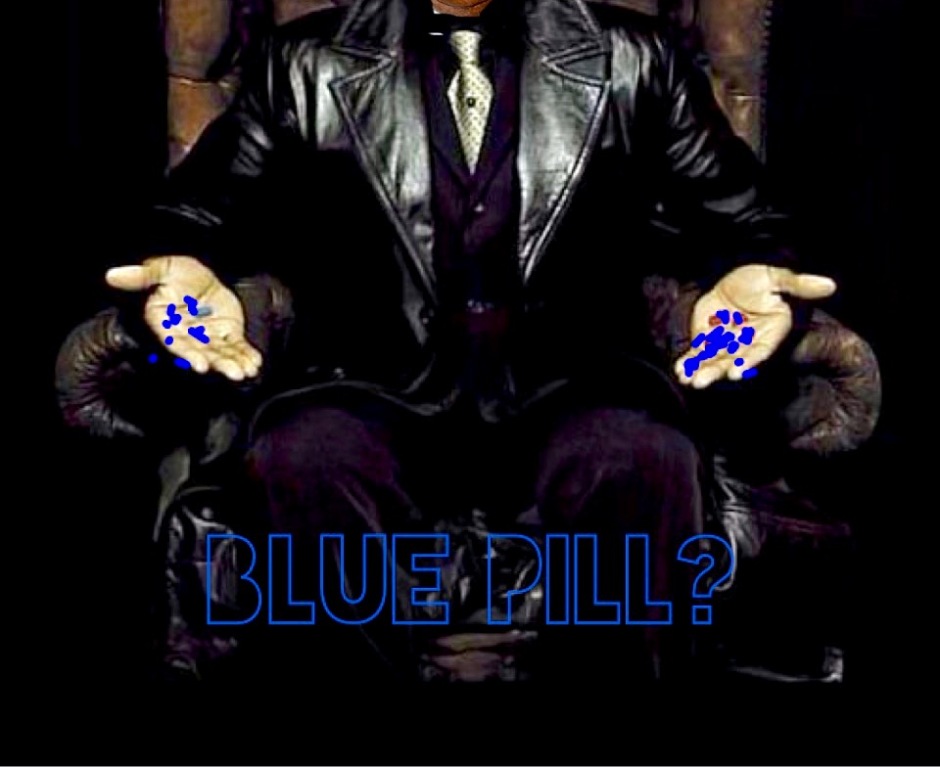 I’m somewhere between furious and deeply grieving.  I feel weepy.  As more accusations come to light about my childhood entertainer and funny man, I’m sickened.  I know, nothing’s gone to court and nothing’s been proven beyond a reasonable doubt, but it feels icky.

I’ve read the Bill Cosby allegations in The Washington Post.   There is a clear pattern identified by his accusers.   They were invited to take pills.  In my mind’s eye, I see a scene in the movie “The Matrix”.  Morpheus tells the main character there’s a choice, take the blue pill and go to sleep to reality, take the red pill and wake up to it.

Only instead of Morpheus in the red chair, I imagine Bill Cosby offering beautiful young women “The Blue Pill.”  It easily becomes an analogy.  At some point in our lives, we women often choose going to sleep over experiencing our real power.  WE GIVE OUR POWER AND OUR CHOICES TO SOMEONE ELSE.  In Cosby’s case, there have been allegations of drugging and sexual assault. The women interviewed had their reasons for not fighting back or speaking out about him.  They were equally fascinated and scared by the power and glamour. Some of them stayed long after they knew something was terribly wrong.

Over the years, relationships have come and gone for me where someone was controlling. I gave up my voice to keep the peace and gave up a piece of me to keep the relationship. Why?
I have had several friends living in the households of abusers. There have been physical threats, email hacking, text spying and the police have been called and still, they stayed. Why?

The recipient of this behavior doesn’t see themselves, because they are caught up in giving themselves to the will of another. The white knight turns out to be the prince of control. Yet, women abandon themselves to a perceived rescuer. They abandon their personal responsibility and their self-respect. It’s true that some of the most controlling people are also the most charming. Author Joyce Carol Oates said, “And this is the forbidden truth, the unspeakable taboo — that evil is not always repellent but frequently attractive; that it has the power to make of us not simply victims, as nature and accidents do, but active accomplices.”

We, as women, can become the accomplice in our own abuse. We become afraid, sometimes for imagined reasons and sometimes for very real physical ones.  We disappear, we go away mentally and spiritually, while our bodies and our lives remain in the presence of the controller.

Self-care is imperative. Ten years ago, the phrase “self-care” wasn’t on anyone’s radar. But today, there’s a book with the title, blogs and women who practice and preach it. Self-care means putting yourself first. It means finding a good support system, getting physical exercise, getting enough sleep, being creative, using your voice to speak your feelings and opinion and believing that “no” is a complete sentence. It also means surrounding yourself with people you like, respect, and trust.

There is also the question of faith.  Do we turn another human into our higher power?  Or do we find God in the situation and ask for help?

Of one thing I’m certain…  the controller doesn’t actually see the person they want to keep. They have lost sight. The controller sees the person as someone trying to have their own thoughts, friends and perhaps (gasp) their own life and they are threatened by that. Because the controller is convinced everything must be done their way, even if that’s by force, shaming or even drugging.

If you are in relationship or work environment where there is controlling behavior, get help, get perspective, get support and get out! Controlling people want what they want, not what you want. They may blame you, shame you and have anger flashes to get their way. They also often do not see another person as separate from themselves, so are not able to have genuine compassion for feelings that don’t match their own. If you are on edge, feel watched, have been physically attacked or exploited, seek support. There are resources. Talk to friends, find a good counselor or if the situation is urgent and extreme, find a women’s shelter.

Years ago, I was in a relationship that was out of balance. A childhood friend told me I seemed like a zombie when I was around my boyfriend at the time. There was no longer a “me” there. It took a helping hand up and out of the relationship. Two girlfriends and a therapist saved me, but I had to initiate it. I had to declare I wanted out and that I needed help to do it. I needed to wake up to the situation so I could take contrary action.

I must also add on a personal note, I found 12-step groups, faith-based organizations, counselors, and girlfriends to be extremely helpful.

My original question was, why? Why do we do this? Why do we allow exploitation? I’m not sure there’s a pat answer. The female generations before us didn’t teach the importance of self-care and self-worth to women. But there is a solution. We can take action. We can act like we matter, even when somewhere down deep, we don’t always believe it. Acting like we’re worth having good boundaries and good people in our lives is a start in the right direction.  Most women I know, especially my generation, didn’t wake up to the idea of self care until they reached at least forty.  There is a new, vitalized generation of women emerging, but it is the same one bombarded by sexualized images of female singers, models , and movie stars.  The media ideal says if you starve yourself, fold yourself into a pretzel and say ‘yes’ more than you say ‘no’ to sex and being sexualized, you’ll survive and thrive.  It’s out of balance.  It’s B.S.

Whatever your faith, let’s assume for a minute that there’s a universal force at work that loves you exactly as you are.  Let’s assume it already knows #youmatter .  A powerful minister named Emmet Fox preached to thousands around the United States in the 1930’s.  This is one of his best quotes:

“A tragic mistake that is often made is to assume that the will of God
is bound to be something very dull and uninviting, if not positively
unpleasant.  Consciously or not some persons look upon God as a
hard taskmaster, or a severe parent. . . . The truth is that the will of God
for us always means greater freedom, greater self-expression, newer and
brighter experience, wider opportunity of service to others—life more abundant.”  -Emmet Fox

We matter. And we don’t matter because we look hot, we make a lot of money or we’re good mothers and wives. We matter because we matter. We are beautiful as-is, in our own right. The message that we have to behave according to someone else’s plan, look good according to someone else’s ideal, and to not use our own voice is very, very old. The new way is self-worth, self love, and speaking our truth. Take the action steps to show how much you matter. Do your self-care and know the people who see you for who you really are will have your back, because you matter.

I made a video to say you matter!

I also have a recorded message at  1 (626) 531-0696 saying how awesome you are.  If you want me to tell you that in real time, leave a call back number!  I mean it.  I’ll call you!  Next time you see a woman you know, tell her, “You matter, because you matter!” We all need to be reminded of that.  Let’s help each other stay awake to our own magnificence!